Can Your Computer Read Your Mind? 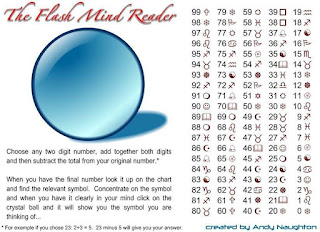 The first time you visit this site, you may think your computer has come to life and has found out how to read your thoughts.

You might suppose our machines are ready to take over the world (bringing to mind “Hal,” the infamous on-boight supposeard computer in Stanley Kubrick’s masterpiece film “2001: A Space Odyssey”).

Try it a few times:

You won’t believe it. Seems impossible. Take a minute or two right now and see if this doesn’t make you scratch your head in amazement.

But have no fear ... it’s all just simple algebra!

Here’s how it works:

Since t can only be a whole number from 0 through 9, n = 9t can only be a multiple of 9 less than 90: 0, 9, 18, 27, ... 81. So, no matter which two digit number you initially select, you will end up looking up a multiple of 9 in the chart! The writer of the program on this site has been careful to place the same symbol next to each multiple of nine in each version of the chart shown to viewers, and has instructed the program to expose that symbol in the "crystal ball" when the user clicks on it.

Go back to the puzzle page. No matter how many times you open a new and totally different puzzle page, you will notice that, on each new page, all multiples of 9 less than 90 are always associated with exactly the same symbol (the other numbers will never come up, and so they are assigned random symbols).

Here's an entertaining variation of the game:

First, send someone a number/symbol chart together with a letter the game's instructions. Then, after this person tells you he's received the letter, has calculated his "magic number," and has found and focused on their "magic symbol," you mail him another letter in which you tell him which symbol you "psychically" picked up (of course, this is the symbol associated with each multiple of 9 on the rigged chart you sent).

For even more fun:

After your victim receives the initial letter from you, you might like to place a harmless bet with the victim (say, for lunch at the winner's favorite restaurant), that you will, in fact, be able to "perceive" his magic symbol through your superior psychic powers. When you successfully "intuit" his symbol, you’ll not only get a good laugh out of it, but a free lunch with a good friend as well (unless your friend is unusually adroit with numbers, he will totally miss the pattern underlying this trick).