NO MUSIC While Studying 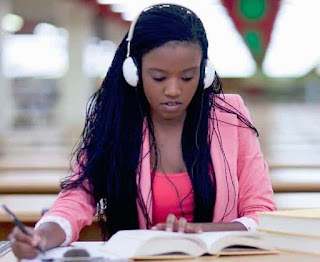 A common point of contention between parents and teenagers is whether or not to allow listening to music or other “multitasking” activities while doing homework or studying.

Many teenagers do multitask while studying. And some of them do quite well in school.

The question, however, is not whether certain very bright students can multitask while studying and still get good grades. The real question is whether these same students, and especially average or underachieving students, would do better if they were to focus only on their studies, without interfering distractions.

A republished L.A. Times article does an excellent job of addressing the issue, and of presenting statistics and expert opinions on the subject:

My own opinion, based on nearly four decades as a professional academic coach, is unequivocal. I think it's obviously a mistake, and a major one, to allow any “multitasking” while doing academic work – whether involving music, instant messaging, video games, or any other distractions. Yes, people are different, and certain people find multitasking easier than others. But it’s common sense that no one, no matter how talented, can pay attention to and concentrate on two different tasks (never mind four or five) as well as he or she can on just one.

Do the following experiment right now:

Try thinking of two different things at the same time, say: the taste of strawberries, and the quadratic formula. In the exact same instant of time, think of both things. Can't be done! The best one can hope to do is rapidly switch back and forth between the two thoughts, dulling mental focus and wasting valuable energy.

Quoting from the article:

“Research has shown that, with practice, people can improve how often and when to shift focus to other tasks most efficiently, and they can sharpen their ability to visually scan between windows open on a computer screen.

But decades of experiments on adults have proved that performance suffers when people try to multitask.”


The problem is that studying and homework are often boring. They aren’t always fun things to do. And, unfortunately, many parents have allowed fun and instant gratification to rise to the top of their teenagers’ lists of values.

Parents need to remember, and children need to be taught, that it's called home “work” for a reason. It's not supposed to be fun; it's supposed to get done, and done well.

Work is, by definition, generally not fun – at the moment you’re doing it. But it’s a lot of fun later on, when the mega-rewards of consistent, disciplined effort and deliberate sacrifice toward worthy goals come pouring in (e.g. success, happiness, money, pride, confidence, a plethora of life choices, etc.).

Contradicting the hedonistic value systems of too many Americans is the fact that boredom is not the worst experience a person can have. Parents must to learn to say “no music” and make it stick without fearing the momentary displeasure or rolling eyes of their own teenagers. Teenagers would profit by learning to sacrifice overrated comforts and delay gratification for the much greater pleasures that attend the accomplishment of major life goals later on. Indeed, most American students would do well to aim to become more self-motivated and self-disciplined, less dependent on external stimulation, and more honestly self-reflective.

Still a multitasking holdout? If so, I have a question for you:

How many tests have you taken with the comfort of your favorite music playing in the background?

The correct answer is zero, driving the final stake through the heart of the notion that it's somehow a good idea to listen to music while studying. Clearly, if you train yourself through repetition to need the support of energizing background music in order to focus your mind and perform at your best academically, the end result will not be pretty.

If maximum success in school is important to you: NO MUSIC (or other distractions) while studying!